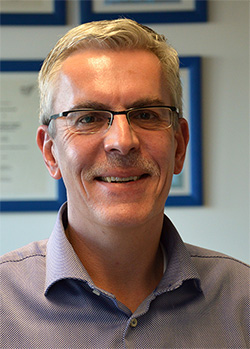 Director of Chair for Software for Systems on Silicon

Rainer Leupers received the M.Sc. (Dipl.-Inform.) and Ph.D. (Dr. rer. nat.) degrees in Computer Science with honors from TU Dortmund in 1992 and 1997. From 1997-2001 he was the Chief Engineer at the Embedded Systems Chair at TU Dortmund. In 2002, he joined RWTH Aachen University as a professor for Software for Systems on Silicon. His research comprises embedded software development tools, system-on-chip architectures, hardware security, and electronic design automation. He served in committees of the leading international EDA conferences and received various scientific awards, including Best Paper Awards at DAC and twice at DATE, as well as several industrial awards. Dr. Leupers is also engaged as an entrepreneur and in turning research results into innovations. He holds several patents and has been a co-founder of LISATek (now with Synopsys), Silexica (acquired by Xilinx), and Secure Elements. As the coordinator of the TETRACOM and TETRAMAX projects, he created a structured approach to academia-to-industry technology transfer with 100+ successful instances across Europe.